Ajatha Nagalinga Mahaswami Math has a history of around 200 years. This math situated in the Navalgund ,Navalgund taluk of Dharwad District,Karnataka, India and it is 47 km away from the Dharwad. And 39 km away from Hubli. The math was built by shree Nagaling swamiji. Shree Nagaling swamiji was a great philosopher and pawad purush during the 18th century. The devotees are come from all the states, all region of peoples Hindu,Muslim,Punjas,Christian, are coming to muth and taking the blessings of shree Nagaling swamiji. The great line says that “There is a Bible, but not a church. There is a punjab,but it’s not a durga.There is Coffin, but it’s not Graveyard.Its nothing but Ajatha Nagalinga Mahaswami Math“

Shri Nagalingaswamiji was an extraordinary Saint, scholar and a Pawada Purusha (individual with yogic force). Swamiji was brought into the world in the year 1812 of every town called Javalageri in Sindhanur Taluk of Raichur locale, Karnataka. Swamiji took birth with the favors of Mata Kalika Devi; Swamiji is believed to be the resurrection of jaganmata. At an early age itself Swamiji got vairagya and focussed his brain to achieve the most significant level of adhyathma. His longing was satisfied by Shri NirupadiSwamiji of Talekattu. Swamiji accomplished an estimable situation of the Uparathi Yoga. Swamiji visited everywhere in India and his leelas were apparent. Swamiji attempted to keep collective concordance in the general public.

The confirmations of his leelas can in any case be seen now. In one of such episode, Swamiji made a major opening of an old silver coin size in a Bible book, he told that the book would recuperate all things considered with all letters which were lost because of the opening. As his colloquialism, the total book is recuperating now with the same letters. The book recuperates very much like the injury recuperates on the human body. This leela has become an extraordinary test to the field of science. This book is adored in the Math day by day, consistently numerous enthusiasts visit to observe something very similar. Large numbers of such leelas are capable and are happening in Math.

So Swamiji is entitled with YATI CHAKRAVARTHI (King of Yatis) and furthermore AJATH (One who vanquished the birth and demise cycles). Shri Siddharooda Swamiji of Hubli, Madiwala Swamiji of Garag, Shishunal Sharif are the peers of Shri Nagalinga Swamiji and he was respected by them as well. Shivanand Swamiji of Gadag, Veerappa Rajendra Swamiji of Nargund, Sharanabasaveshwar of Nagarahalli, Samagra bheemavva of Navalgund were honored by Swamiji. At last in the time of 1881, swamiji accomplished Samadhi at Navalgund. 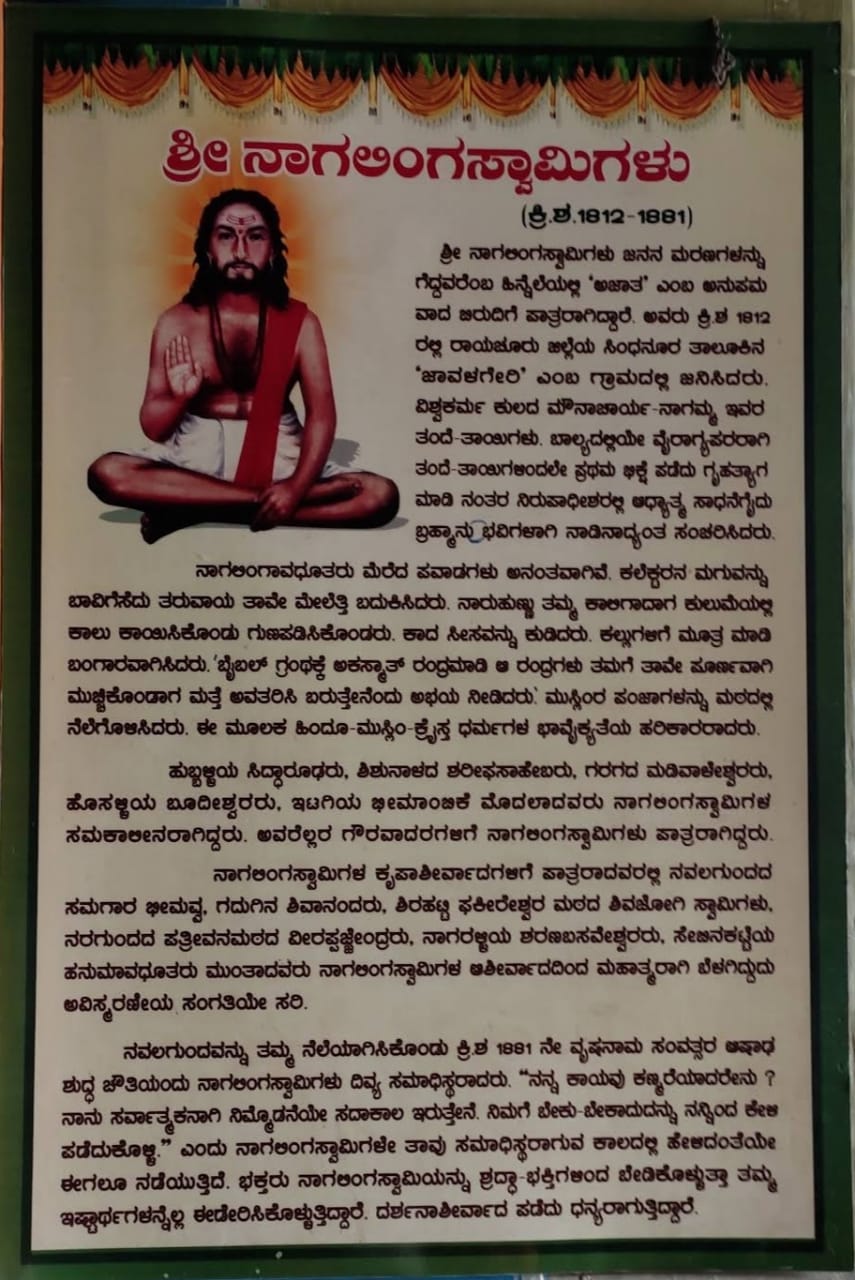 The Shree Ajantha Nagalinga Mahaswami jayanthi is celebrated in the every year of Nool hunnime which comes from shravana masa. Festivals done in math are those:

Shree Ajantha Nagalinga Mahaswami Math, is situated in the Navalgund and it is Nargund taluk of Dharwad District and it is 47 km away from the Dharwad. And 39 km away from Hubli. This math is having  Good Transportation from other places.